uh oh…RTE got in trouble! *UPDATE*

Here is the aforementioned paintings for your viewing ‘pleasure’…

Below is the caption the artist eh..captined on the paintings s/he placed in the National Portrait Gallery. It has now been revealed the the police are ‘investigating.’ Investigating what exactly? Someone painting a satirical portrait? Get a f*cking life, the government. Investigate the crowd of shysters in the banks instead.

**READ THE CAPTION AND WATCH THE NEWS STORY AND APOLOGY, JUST CLICK ON THE LINK BELOW!!**

“Brian Cowen, Politician, 1960-2008. This portrait, acquired uncommissioned by the National Gallery, celebrates one of the finest politicians produced by Ireland since the foundation of the state.

“Following a spell at the helm of the Department of Finance during a period of unprecedented prosperity, Brian Cowen inherited the office [of] Taoiseach in 2008.

“Balancing a public image that ranges from fantastically intelligent analytical thinker to big ignorant f**ker from Offaly, the Taoiseach proves to be a challenging subject to represent.” 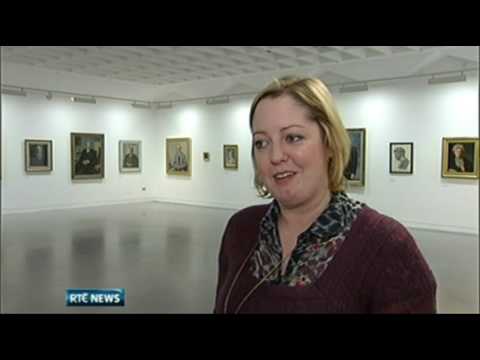 What do you think of al that people!? Do you think our national broadcaster should have obviously been forced asked to make such a public apology?  Was the story in poor taste? Did it undermine whatever power or prestige you think the office of Taoiseach still holds? …and the big question :

What Would Barack Do?

HERE IS MY DEEP AND INSIGHTFUL MASTERPIECE. PART 3 IN A SERIES OF ‘ANIMALS WEARING SHOES’. SEND US YOUR DRAWING OF BIFFO IF YOU PLEASE!.

NOW - STAND BACK AND APPRECIATE MY GENIUS.

This entry was posted on Wednesday, March 25th, 2009 at 2:12 pm and is filed under Watch This!, What's in GOSSIP!, What's in STUFF!. You can follow any responses to this entry through the RSS 2.0 feed. You can leave a response, or trackback from your own site.

Brian Cowen should have took it on the chin (or stomach) in fact to show his lighter side he should have offered to buy them. I think Barack would have sure when they met didnt he crack a funny saying he could be Brians cousin lol

he did gina.. the pics are actually good.. its hilarious that they issued an apology!

i thought the were brilliant I really dont kno

erm dont know why they had to apologise.

I dont see why they had to apologise.Its not like they painted it themselves.Hes lookin well in it anyway,Ha!

they shud have shown the one of him on the toilet!!

I want to see the toilet one too!!

aww he’s got bog roll in one hand sweet

i think its all so funny… “i’m sure the guards can leave all the unsolved crimes alone while they investigate this disturbing matter”. fools

Me too! Haha!
Ooh Sandy has smilies. I want smilies.

you have them you mad yoke, they’ve been on here for ages, BUT you now have them on the forum too - especially for you! x

this is mad isnt it they were saying on ray darcy this morning that the police approached them because they said on air on monday that they had the artist’s email address so when they said they wouldnt give it to them the policeman said they’d get a warrent and that the artist could be charged with incitment of hatred and criminal damage how mental is that!! i also think its funny that the news had to apologise to cowen but pat kenny didnt have to apologise for the blacked up comment this country is backwards!!

Today FM have a right to withhold that information I’m sure…if the gardai try and force them to surrender it then I swear to jebus - I’ll MARCH!!!!

I THINK THE WHOLE COUNTRY SHUD GET BEHIND THIS AND EVERY1 DO THEIR OWN ARTIST IMPRESSION OF UR MAN BRIAN…. THEY CAN’T CHARGE US ALL…..
LIKE HAVE THEY NUTTIN BETTER TO BE DOIN…. LIKE, OH I DUNNO, CATCH ALL THE LIL MURDERIN SCUM, DRUG DEALERS, THEIF’S…..

THIS COUNTRY IS A JOKE…..

Are you asking me to do another drawing Janice? You don’t have to be shy, it’s okay to approach genius.

Seriously though, I would LOVE if you all did a drawing of him - we’ll put it up on the site and then send them all to Today FM AND email them to every single government office…mwa ha hahahahah!

*Only if we don’t get arrested though…*

YES MISS B….
I’M ASKIN FOR YOU TO DO ANOTHER DRAWIN….. I’M IMSPIRED BY YOUR PRINTS… THEY HAVE SUCH DEEP MEANING…..

I shall do him as one of my series of ‘animals wearing shoes’ so…..

There you go. He could be a zebra. Or a donkey. It is for you to allow your mind and zeitgeist to decide.

THAT IS CLASS B….

AND OOZZZING SEXUAL VIBES LIKE TOM JONES, SO YE HAVE TO THROW UR KNICKERS AT HIM HAHAHAHAHA!!

indeed that is an insightful perception of the sexual existensialism of the subject.

Now send us one!

i will try draw one when i get home from dinner.. am crap at art thou

Ha ha ha!!! This is such a crock of sh*t. I was listening to Matt Cooper earlier and actually glaring at my radio with my eyes widened at how badly some people are taking this. GET OVER IT!!!!!!!!!!!!!!

i love the one of him on the bog im really its great I do all my thinking and make most of my important decision whilst on the Loo. If Mr COWen admitted he did this too then I personally think we would take him more seriously

Sandy there is no such thing as bad art. Ask Tracey Emin.

Everyone! Join in! Even if it’s only a stick man with big lips! We shall do an all new post for them!

its done now where do i send it?

i sent it to the info address

Ah poor Mary Harney….I can’t believe they painted her like that…….oh wait that’s Brian Cowan. My bad I always get the 2 mixed up LOL.
I bet he comissioned them himself to take the spotlight off the state he has this country in.

where are the ppl’s drawings? i’d like to send postcards of the portraits

I can’t believe this is getting taken so seriously! Like… a few funny pics are surely the least of anyone’s worries? Sweeo mother of the divine baby Jayyyyyysis!

I also have sent one to the info mail address..

mine is rubbish fairy

I’m doing up a new post for the afternoon! They can be good or bad or genius like mine - no preference!

I think we should actually start an email campaign with them all in it and send it everyone, and get everyone to send them to the government offices.

ha ha i think ur dyin to be arrested B!! i’ll send it anyways!!

:D:D that is sooo funny! Sandydee mine is rubbish too… but I tried… a for effort I think!

sandydee is that pic taken in ridley’s world of wonder in newyork???

haha.. I have the EXACT same one! hehe! soo funny! I loved the little man when he appeared like a tiny elf in the book case and danced on the coins to that weird little song.. I didn’t like the shrunken heads

i loved the black tunnel thingy where it felt u were upside down walkin thru it. i kept runnin thru it like a 5yr old my fiance cud barely get thru it.. it was good but i prefered maddam tusseu’s

I didn’t go to maddam t’s… wasn’t that interested in it! yeh that black hole thing was mentall.. I really felt as though I was upside down and all in it! ugh.. vertigo or something like that!

ya i got a headache from it in the end! it had some crazy stuff in it really!! u see the woman with the steel rings on der necks and they showed one havin hers removed after so many yrs and her neck was like a giraffe

haha :D:D yeh I did see that alright.. weird weird weird stuff! but the shrunken heads were the worst :(:(

were they real thou?

I’m pretty sure they were.. my boyfriend said they were but of course he could have been lying. They looked real.. tincy little hairs on their heads and all.. downy face hairs.. ugh!

how long ago were u in new york?

I’m tooooooootally off topic at this stage, but my constitutional law lecturer wants to cover this next week in class, we’re looking at the charges and how far away from having a leg to stand on the DPP would be in bringing any. It’ll be some laugh, I’m really looking forward to it! (Ok I’ll take off my nerd glasses now.)

That’s not off topic at all Niamh - in fact the opposite. i’d be quite interested to know what he has to say on it - keep us updated?

*P.s i’m going to upload everyone’s drawings/photos of Biffo after my tea, so keep sending them into to us at info (at) the stylebitches.com

its on the front page on sun today

Just wanna point out how poor and wooden RTE news is, as it really pisses me off…

The newscaster says, using all her journalistic adeptness, that “The portrait of Brian Cowen, who is not thought to have posed for the anonymous artist….”

No Shit he didn’t pose for the painting! Did they really think they had to cover their asses just in case, in some weird parallel world, it turns out Cowen did pose for it?

Was it RTE’s attempt at humour?